Municipalities of the Liri Valley

Here below there are the links to the websites of the administrations of the municipalities involved in the project. 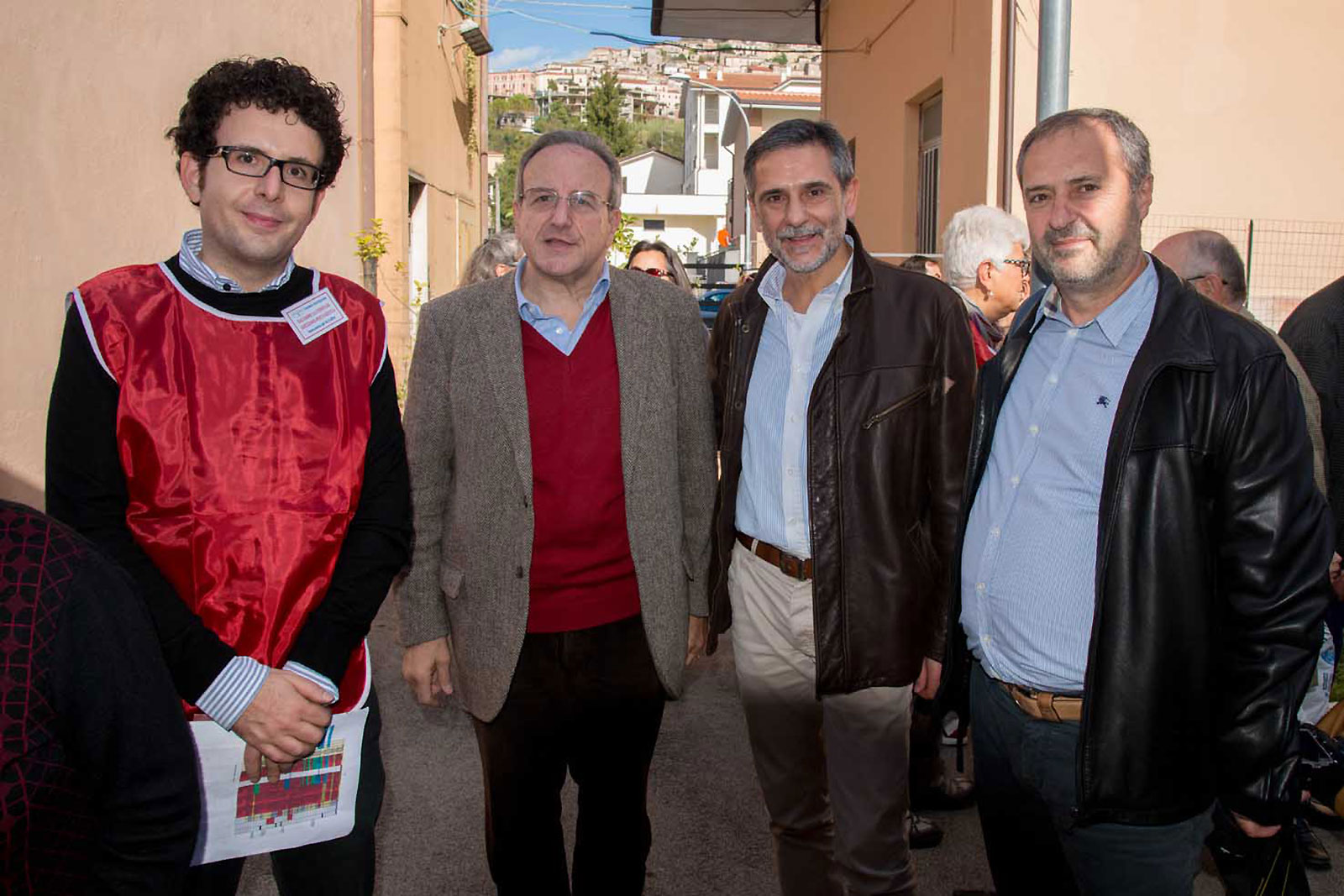 Special focus is not only on the material restoration and, therefore, the reactivation of the railway-line section  Avezzano – Roccasecca , for which  the replacement of rails and sleepers is presently  undergoing , but also on the recognition of its cultural value as a rare turist attraction , to add on  as Unesco heritage site .
The main  focus is on the  Helicoidal Tunnel of Capistrello . The Municipality  of Capistrello, with the specific support of the Interregional Committee “Save the Railroad Avezzano-Roccasecca”, has launched a program to ensure that this section of the rail-track is ascribed among the places to be protected internationally. And, in the meantime, adequate measures have been taken in order to safeguard the tunnel’s side walks , once upon a time made to use by the stonecutters during the construction of the railroad .

Such a Capistrello’s tunnel site  can be considered a masterpiece of railway engineering. Built across the late nineteenth and the early twentieth centuries to solve the technical problem of overcoming a steep gradient in a relatively small space , it was excavated inside the rock along a spiral path that runs up into the mountain, almost like a spiral staircase , which allows the convoys to easily overcome the uphill section of the railroad .The railway which connects Avezzano with  Roccasecca is full of history. With its eighty kilometres across  the two Italian Regions of  Abruzzo and Lazio does run through valleys, gorges and ravines, taking the travellers into breathtaking landscapes.

During the monitoring of the status of restoration works along the railroad and  its stations, some members of the Committee “Save the Railroad Avezzano – Roccasecca” ( of which the lawyer Mr.Emilio Cancelli and the engineer Mrs. Rosaria Villa were respectively appointed as president and vice-president ) did notice that near the entrance to the helicoidal tunnel there were piles of  many basalt-stone blocks , once removed from the side walks of the tunnel . Those basalt stones do have great historical value , because originally carved out one by one by  miners and stonecutters working during  the construction of the railroad . Fearing such historical  stones could be stolen , Capistrello’ municipal authorities and police did  take all appropriate actions to remove and  safeguard such valuable historical material .Lawyer Cancelli  and Engineer Villa specific intervention in no way did slow down or stop work for the reopening of the Avezzano-Roccasecca , but did assist at best  the purpose of enabling the temporary activity required for a faster renewal of the armament and consolidation of the tunnel , better qualifying the project targeted to the recognition of the Capistrello Helicoidal Tunnel as UNESCO heritage .

The factory of the military gun-powder, built in the last decade of the nineteenth century in the area of the Municipality of Fontana Liri, was the most relevant reality in the history of that territory , bringing a change in its landscape and hastening its development towards an industrial vocation . Over a hundred years it has always been maintained efficiently and abreast with the times and with the progress in the field of industrial explosives .

The factory was modernized, upgraded and equipped with facilities and devices particularly sophisticated , The plant , initially built in such a territory , was then enlarged  to cover a total area of 64 hectares ; the energy to feed the industrial plant was taken from  the river Liri , by a dedicated hydro-power station.
The production of the first quantities of gun-powder dates back to 1896. In 1904, by decision of the Ministry of War, the factory was named  the ” Royal Gun-Powder Factory on Liri ” .
Over the years the Factory has been the most popular and highly qualified military establishment for the production of shooting explosive . During the Second World War it gave work to thousands of employees, but after the armistice of September 1943 , it was severely bombed and largely destroyed .
Rebuilt after the war, the industrial plant still has constituted a source of employment for many families in the territory and in the neighbouring towns. Today the number of employees has dropped significantly. In 1979, following the reorganization of the military industrial establishments, the old gun-powder factory was renamed and so , in 1984 , did become the ” Military Establishment for Propellants “.
Recently, within such a new industrial set-up ,it has been completed the building of a major plant for the production of spherical powder, usable as the ammunition for  portable weapons .
In recent years, such an industrial site has been the venue for several , relevant and well known  meetings , conferences , medical days , concerts , art exhibitions  and other events, such as the ” Marcello Mastroianni Prize “.

A FAMILY HISTORY OF MEN AND IDEAS

Born in Arce, in the Italian province of Frosinone, in the first half of the twentieth century, originated from a small workshop , the ” Polselli Mill ”  is today a leader in the milling industrial sector in Italy for top-quality  production of flours for bread , pastries and pizzas .
Led for over a century by the business experience of a family that is now in its third generation , the ” Polselli Mill ” is a company working every day to meet the needs of consumers , with unique products, both natural and innovative at the same time .
Hard work and true passion combined with high quality and reliability are the values on which the Polselli family’s dedication for wheat products is based . These principles are reflected only in the exclusive use of top-quality wheat and constant work to maintain high production standards , through the selection of raw materials and the careful control of the entire production process .
Tradition and innovation, these are the watchwords : product innovation , through a constant effort to obtain products of high organoleptic standards , hygiene and nutritional characteristics ; innovative industrial processing making use of the most appropriate technologies , in order to obtain a product that maintains its optimal features ; innovation in the industrial process control and analytical work ,to secure chemical and microbiological  assessment of the nutritional values , functional safety and preservation of the products offered to the consumer market .
The ” Polselli Mill ” is a company of dedicated people ; their commitment and their professionalism are the real competitive advantage .  A true commitment that did manage to achieve  a successful model that is the solid base for the research and the study of consumer needs, the selection of the raw materials and the challenge to keep continuing with constant innovation and protection of the environment .

Sowing and harvesting: Over 100,000 MT per year of wheat
Products selection and stockage : Over 70,000 MT per year
Grinding: over 22 different varieties of wheat and grains treated per day
Mixing: Over 20 types of different blends
Products commercial distribution: Exports in over 30 countries in the world

This website uses cookies to improve your experience while you navigate through the website. Out of these, the cookies that are categorized as necessary are stored on your browser as they are essential for the working of basic functionalities of the website. We also use third-party cookies that help us analyze and understand how you use this website. These cookies will be stored in your browser only with your consent. You also have the option to opt-out of these cookies. But opting out of some of these cookies may affect your browsing experience.
Necessary Always Enabled
Necessary cookies are absolutely essential for the website to function properly. This category only includes cookies that ensures basic functionalities and security features of the website. These cookies do not store any personal information.
Non-necessary
Any cookies that may not be particularly necessary for the website to function and is used specifically to collect user personal data via analytics, ads, other embedded contents are termed as non-necessary cookies. It is mandatory to procure user consent prior to running these cookies on your website.
SAVE & ACCEPT